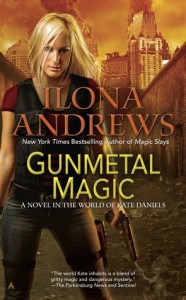 This rating is probably unfair. If this weren't a Kate Daniels World novel, I might give it five stars. But since it is, I missed Kate and Curran a lot. It's hard for me to give a book five stars when it felt like something was missing. Kate and Curran made some appearances, once or twice as a couple, and then Kate was involved in an action scene at one point. I wanted more!

I adored the mating game between Andrea and Raphael. Back in the earlier books, when Curran was courting Kate, we got to see how shapeshifters handle dating--basically, pranks and invasion of personal space mean "I love you." Now, with Andrea and Raphael, I got to see more of that. These were hilarious and fun moments.

The plot was excellent and well-executed, as I've come to expect of a Kate Daniels World novel. To avoid spoilers, I won't go into that. But I'll say only that I had no complaints about plot.

Outside of not seeing Kate and Curran as much as I'd like, my only other complaint came up toward the beginning of the book. In the first two action scenes, Andrea fought some kind of giant insects and then a giant blue beast. If you read the prior Andrea-Raphael novel, you'll recall that Andrea fought a giant dog in that one. So toward the beginning of this book, I was thinking: Is Andrea only going to fight giant creatures? I mean, the occasional giant creature is exciting. But after three (including the novella), it begins to look like a series of video game bosses. There are merits in fights between beings of similar size; for instance, the technique can be more refined. However, after the first third of the novel, the bad guys were more normal-sized (and hard-core in their own ways). So my concerns went away.
Tweet