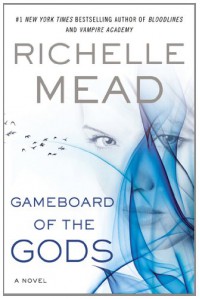 Discussion about this book on my blog: http://www.fantasyfloozies.com/2013/08/book-of-month-chat-gameboard-of-gods-by.html.

This was my blog's July book of the month, so a chat discussion between me and three other reviewers will be posted on my blog in about a week. Spoiler: it appeared that none of us particularly enjoyed it.

I've been going back and forth about whether to write my own review on this, separate from what I said in our soon-to-be-posted discussion. In the end, I've decided to do a sort of mini-review.

There were some great things and some not so great things about this book. Let's start with the great things, because I'm feeling generous. There is some pretty complex world-building here. The various regions of the world have created different alliances and cultures than we have in reality. Most of the story takes place in the RUNA, which appears to be North America or thereabouts. The RUNA is big on their high-tech. Some of the citizens who come from smaller, purer gene pools suffer from a genetic disease. The lower classes have to follow breeding guidelines, which help them to avoid this disease. And since the story starts outside of the RUNA, there is plenty of opportunity to contrast RUNA culture with elsewhere culture. Mead created a brand new world here, and I appreciate that.

Another plus is that there's a sex scene pretty early in the book. :)

Now the negatives: The world-building, as extensive as it was, was also disorganized. Lots of terms were made up (as expected), and in some cases, multiple terms were used to refer to same things. Given that there was a lot about the world that needed to be presented, it would have been nice if there had been some effort to stick to common terms throughout. Perhaps some of the made-up terms could have been more clearly based on well-known words, or the duplicate-meaning terms could have been nixed. Also, for most of the story, I wondered: What's the point of all these details?

In the end, most of the details came together, and they were pretty much all relevant to the conclusion. But if I spend 75% of a story thinking "So what?" I think that's an issue.

There were three POV characters: the hero, the heroine, and some random kid. I kept waiting for the kid's POV to be relevant. It never was, as far as I could tell.

Now I have things to say about the romance. Okay, I have only one thing to say: lukewarm. I just didn't feel the heat. All the frustration I was supposed to feel that these two people couldn't stop upsetting each other--I felt that. But there wasn't any heat in their arguments. There wasn't any of that I-hate-you-but-I-totally-wanna-do-you tension. There were just two people who believed they were attracted to each other but couldn't be honest about it.

Okay, so this didn't turn out to be a mini-review after all.
Tweet